In the latest analysis publication by the EHB group, five large-scale pipeline corridors are envisioned to deliver the accelerated 2030 hydrogen demand and supply targets set by the REPowerEU plan. These corridors will play a key role as a cost-efficient solution to transport large volumes of low-cost hydrogen supply to demand centers. The corridors will initially connect domestic local supply and demand in Europe, before expanding and connecting European regions and neighbouring countries with low-cost hydrogen export potential.

The corridor analysis has recognised sufficient hydrogen supply to exceed the European 2030 domestic supply targets, contributing to European energy independence and security of supply. EHB has identified 12 Mt (~400 TWh) of potential EU hydrogen supply, exceeding the domestic REPowerEU target of 10 Mt of green hydrogen by 2030. In addition, the analysis saw hydrogen import potential. EHB also recognised a large share of EU hydrogen demand to meet the 2030 target, with an expectation for 2030 demand to accelerate further following the REPowerEU publication. Both hydrogen supply and demand will substantially increase towards 2040.

According to the analysis, the deployment of such a European Hydrogen Backbone infrastructure by 2030 will enable market actors to develop supply and demand more rapidly and cost-efficiently. To ensure the development of these supply corridors by 2030, speed is of essence and action is needed now. Five concrete key actions:

“The latest EHB analysis shows that the potential of the region of Finland, Sweden and the Baltic countries, i.e. the supply corridor D, is significant. The potential market size of the region is estimated to be 127 TWh per year already in 2030, which corresponds to about 20% of REPowerEU targets for hydrogen and about 38% of the target of domestic hydrogen produced in EU. Hydrogen economy is therefore a very significant opportunity to the countries around the Baltic Sea with great renewable energy resources, space, and forerunner position in development of sustainable technology solutions”, says Gasgrid Finland’s Sara Kärki, Head of Strategic Analysis & RDI.

The five corridors span across both domestic and import supply markets, consistent with the three import corridors identified by the REPowerEU plan. The published hydrogen supply corridors are: 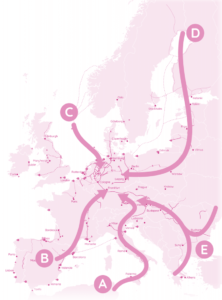 The European Hydrogen Backbone initiative consists of 31 European gas infrastructure operators, united through a shared vision of a climate-neutral Europe enabled by a thriving renewable and low-carbon hydrogen market. The EHB initiative aims to accelerate Europe’s decarbonisation journey by defining the critical role of hydrogen infrastructure – based on existing and new pipelines – in enabling the development of a competitive, liquid, pan-European renewable and low-carbon hydrogen market. The initiative seeks to foster market competition, security of supply, security of demand, and cross-border collaboration between European countries and their neighbours. www.ehb.eu

Gasgrid Finland Oy is a Finnish state-owned company and transmission system operator with system responsibility. We offer our customers safe, reliable and cost-efficient transmission of gases. We actively develop our transmission platform, services and the gas market in a customer-oriented manner to promote the carbon-neutral energy and raw material system of the future. Find out more: www.gasgrid.fi/