This document provides the indicative capacity values which will be applicable after the commercial commissioning of the floating LNG terminal. The impact on capacity caused by the changed operating environment, when it comes to physical gas transportation in the Finnish gas network, is also described in this document. According to the current schedule of the floating LNG terminal, the commissioning is in December 2022. Both initial terminal site options, Inkoo, Finland and Paldiski, Estonia, are progressing according to that schedule. The progress is continuously monitored, and the initial terminal site is announced as soon as possible in the coming months. Regardless of the initial location of the floating LNG terminal, the final location will be Inkoo, Finland, when the port structures are completed. The Floating LNG Terminal Oy / Gasgrid Finland Oy is investigating various options for commissioning cargo during the start-up phase. If everything progresses as planned, the floating LNG terminal will start its commercial operation with two slots in January 2023.

The Finnish gas market has faced substantial changes during this year – gas flow through the Imatra entry point was halted in May leaving Balticconnector as the only import route to cover Finnish gas demand. Gas prices have also been very high and there have been discussions on the sufficiency of gas commodity in the upcoming winter. Security of supply has been a focal point among the transmission system operators, gas market participants and nations involved in the energy crisis. The floating LNG terminal improves the security of supply in the Finnish-Baltic region and provides an alternative import route for market participants to deliver gas to the end consumers. The terminal vessel secures gas supply for industry and energy production as well as households, being an important project for Finland and the Baltics.

The commercial principles for the usage of the floating LNG terminal are developed so that the terminal vessel operates as a regasification unit. Regasified LNG can be transmitted to the end consumers, neighboring market areas in the EU region, or to the Inčukalns underground gas storage in Latvia.

Scenario 1 – The floating LNG terminal is located in Inkoo

The floating LNG terminal is located in Inkoo:

The guaranteed technical capacity of the Inkoo entry point in normal operational conditions will be ≈ 140 GWh/day. Any changes in the capacity value will be primarily published on the UMM platform. The changes may be caused by planned or unplanned maintenance works or disruptions in the transmission system or terminal vessel.

Scenario 2 – The floating LNG terminal is located in Paldiski

The floating LNG terminal is located in Paldiski:

The technical capacity of the Paldiski entry point will be calculated and announced by Elering AS.

According to the current schedule of the floating LNG terminal, the commissioning is in December 2022. Considering the operational and technical characteristics and the initial market rules of the floating LNG terminal, the non-binding information is that the terminal operator will offer terminal capacity of two slots per gas month from the beginning of 2023. This means that the floating LNG terminal could be loaded by LNG twice per gas month enabling ≈ 2 TWh/mo of gas to be injected into the gas transmission network during the gas month. The terminal operator will seek means to increase available slots as soon as possible when technical and operational functionality is working reliably.

Current status: Finnish gas transmission system was not originally designed to cover Finnish gas demand fully from South. Gasgrid Finland has done network modelling and capacity calculations for the new market situation where the gas supplies are mainly covered by gas flows from Inkoo area. The existing maximum capability to deliver gas for the Finnish end consumers (to the Finnish exit zone) from the Inkoo area is approximately 105 GWh/day. Hence, the transmission capacity is smaller than earlier when gas flows were covered by imports through Balticconnector and the Imatra entry point. The decreased transport capability increases the risk of gas deficit if the Finnish market gas demand exceeds the level of 105 GWh/day. However, the Hamina LNG terminal will increase exit zone transmission capability to the same extent as the Hamina LNG entry capacity.

Gasgrid Finland is currently planning and will start a capacity enhancement project in the Pölans junction point in order to increase the transmission capability at the Finnish exit zone. The project is expected to be completed latest in summer 2023. After the enhancement project, the Finnish exit zone transmission capability from the Inkoo area will be increased to the level of 135 GWh/day.

The enhancement project will increase the technical capacity for the exit zone remarkably. Depicted in the graph below is the exit zone capacity in the current situation compared to historical Finnish gas consumption. 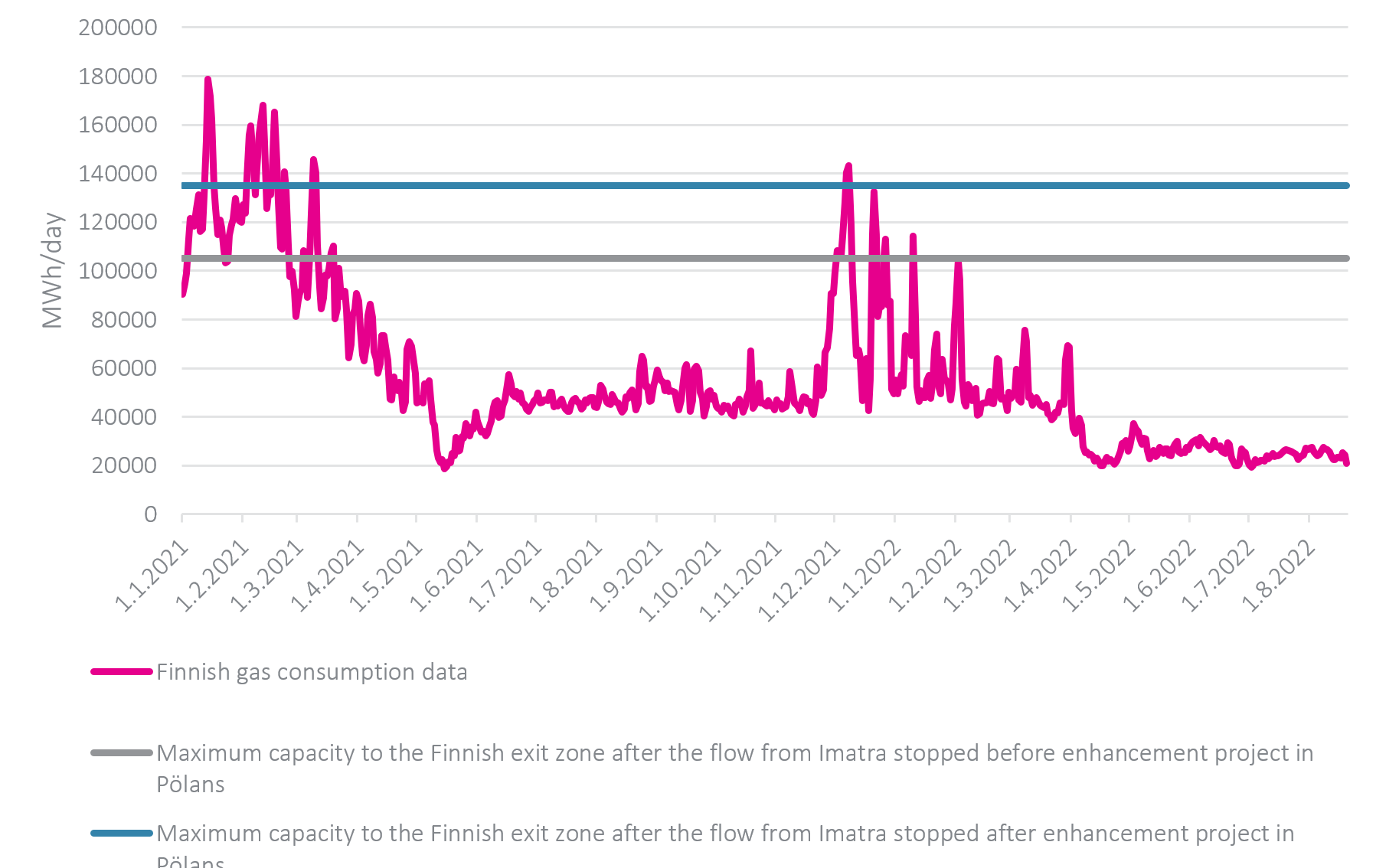 The commissioning of the Hamina LNG terminal

Gasgrid Finland Oy is a Finnish state-owned company and transmission system operator with system responsibility. We offer our customers safe, reliable and cost-efficient transmission of gases. We actively develop our transmission platform, services and the gas market in a customer-oriented manner to promote the carbon-neutral energy and raw material system of the future. Find out more: www.gasgrid.fi/